The Comic Book Alliance, in association with Sheridan Covers, is very proud to announce an extremely limited edition First Day Cover commemorating the Royal Mail’s launch of their comic book stamps on 20th March 2012. The stamps are celebrating 75 years of British Comics.

The First Day Cover features the Comic Book Alliance logo and stamp, plus all 10 of the Royal Mail’s 1st Class comic book stamps:

Desperate Dan and The Dandy
Dennis The Menace and The Beano
Dan Dare and Eagle
Beryl The Peril and Topper
Tiger and Roy Of The Rovers
The Four Marys and Bunty
Buster and Buster
The Steel Claw and Valiant
Twinkle and Twinkle
Judge Dredd and 2000AD.

Ms Sheridan, of Sheridan Covers, said, “I have produced similar First Day Covers for 11 years now… and I have had the pleasure to produce covers featuring organisations such as the William Morris Society, The Mary Rose Trust, The Historical Maritime Society and Friends of the Earth.”

Tim Pilcher, Chair of the Comic Book Alliance, agreed, “This is a really special day for British Comics, getting the recognition they deserve from the Royal Mail. The Comic Book Alliance are extremely pleased and excited to be involved in what is an important of part of both philately and comic book history. Sadly, only three of the publications featured are still being published (2000 AD, The Beano and The Dandy), but there are new titles on the newsstand to replace them including the recently launched The Phoenix and Strip Magazine, proving that the British comics industry is alive and thriving.”

Produced on best archival paper the first Day Covers come with an insert card and protective pocket and cost just £15 (plus postage and packaging) and part of the proceeds go towards supporting the CBA. 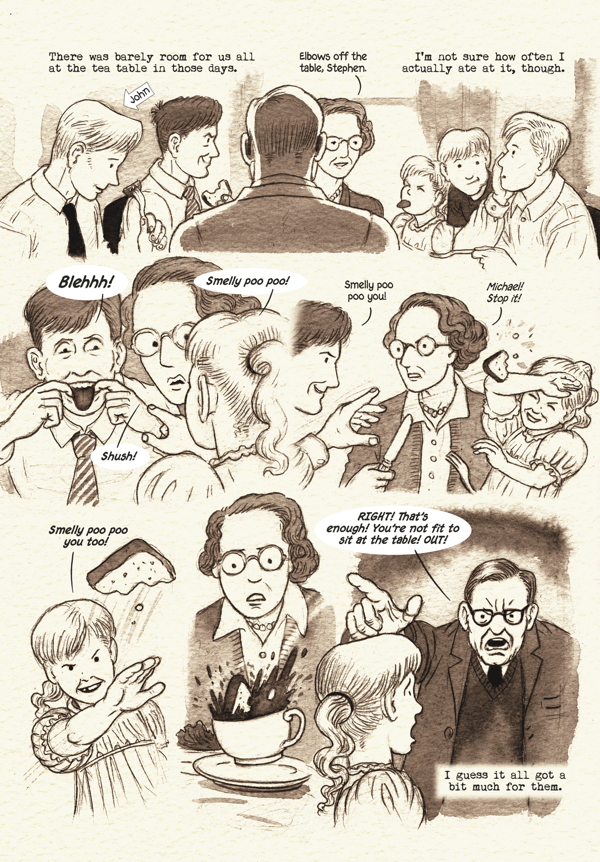 Forest Gump famously said, “Life is like a box of chocolates, you never know what you’re going to get.” Well, that’s true if you don’t read the packaging, but even the simplest of souls can navigate their way around a tin of Quality Street. Life is, in fact, a random series of events, chance encounters and apparent non sequiturs that, when taken individually, have little meaning, but as a totality, have greater significance. The whole is greater than the sum of its parts. 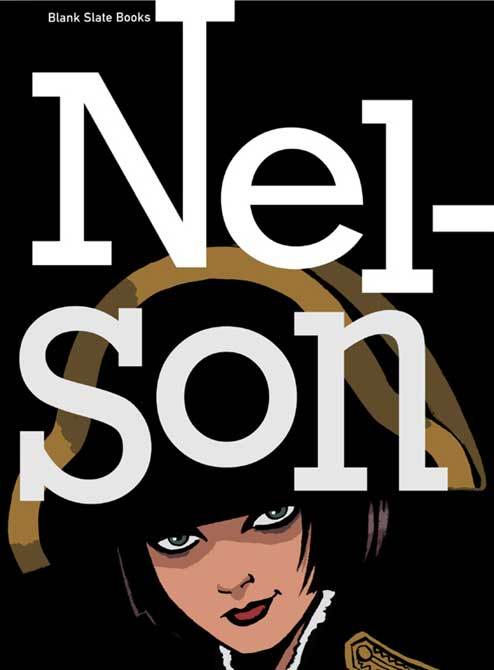 The same could be applied to Blank Slate’s new anthology, Nelson. The book is a masterstroke of the “Exquisite Corpse” concept as it follows the life of Nel, a young day-dreaming girl, born in 1968; developing into a passionate, frustrated artist and young woman searching more out of life; and finally through to an almost resigned, yet comfortable, middle age. We see her develop friendships; gain and lose lovers; and lose and gain family members, while all being set against a historical background that anyone aged 35-45 will find overwhelmingly familiar. It’s a book that demands rereading several times, as hindsight provides the connections easily missed first time round, as well as the historical touches, such as I-Spy books, 70s’ beer glasses, ice-lollies and comics, that all give a subtle sense of place and time.

There are times when I actively didn’t like Nel, particularly her angry, self-obsessed teenage years (hey, we’ve all been there), but this only made her more real. 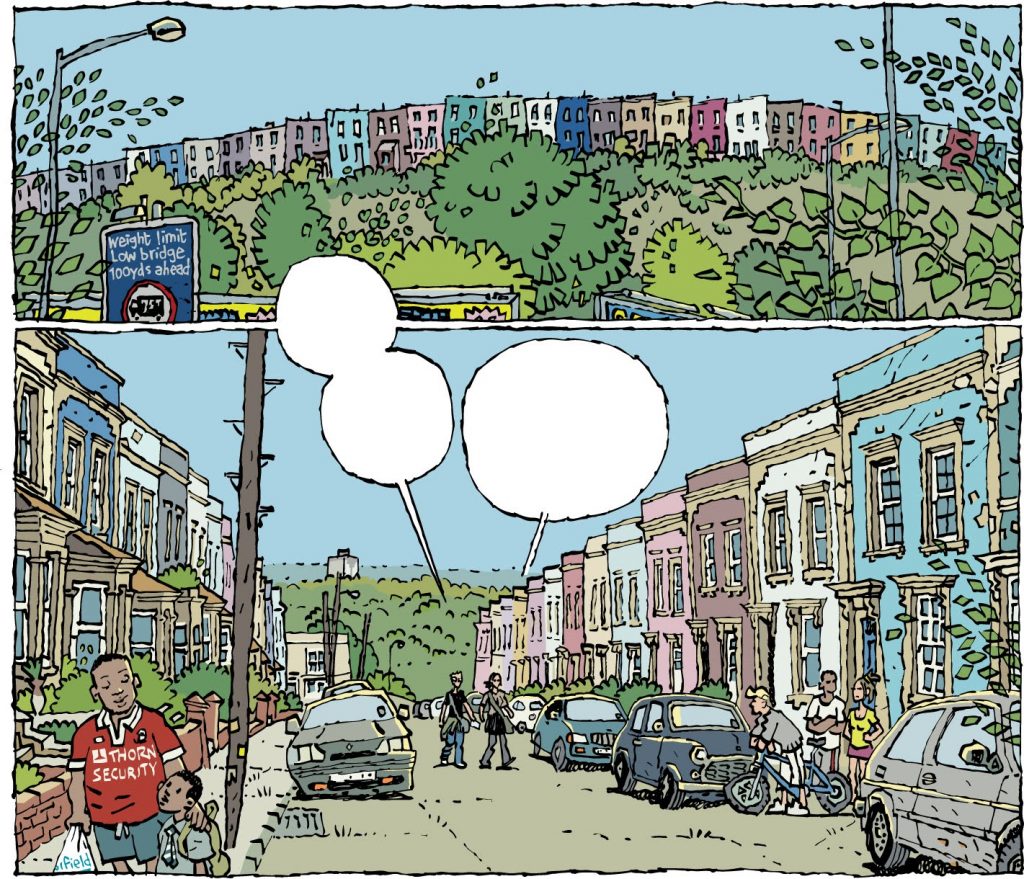 “Anthology” seems like a dirty word for this opus, as it implies lots of creators working on pet projects that have all been shoe-horned into one publication, but Nelson the book is as complex and as rich as Nelson the character. Each of the 54 creators were given one day in a year of Nel’s life and – within certain parameters – were free to do what they liked to progress the titular protagonist’s life.

The diverse range of artistic and literary styles is both a boon and a burden. Occasionally, the transition from artist to artist jars, as their individual visual interpretations of Nel wildly differ, but it’s the mark of their skill that they manage to immerse the reader so utterly into their segment, in less than five pages, that the previous story already feels like the past, before you are whisked onto the following year and creator. With multiple contributor projects there are invariably a few sections that won’t ring true for some, yet I could only find three strips that didn’t work for me artistically, which is pretty incredible out of a 230-page story. With so many excellent creators, it would be unfair to highlight anyone in particular, but honourable mentions must go to Rob Davis for creating the concept in the first place (and topping and tailing the story with two strips) and Woodrow Phoenix who came onboard as co-editor and contributor.

It reminded me a lot of the TV dramas like Our Friends in the North and William Boyd’s Any Human Heart, in the way that it follows a serious of people through their life experiences, and how that shapes them and their destiny. In Nelson, as in all these types of stories, the journey is more interesting that the destination (which, let’s face it, is ultimately death). The book finishes in 2011, and I for one, would love to see the continuation of Nel’s life in a second volume, around 2051!

Throughout the book there’s a pervasive threat of some terrible personal tragedy on the horizon—although one already permeates the book with its ghostly presence. There’s also the promise of neat and tidy resolution to some of the problems plaguing Nel. In a Hollywood movie there would be a big cathartic scene where everything tidies up neatly and we’d leave the cinema in a “feel good” mood. But life isn’t like that. Life isn’t even like a packet of Revels. No, life is more like Nelson. 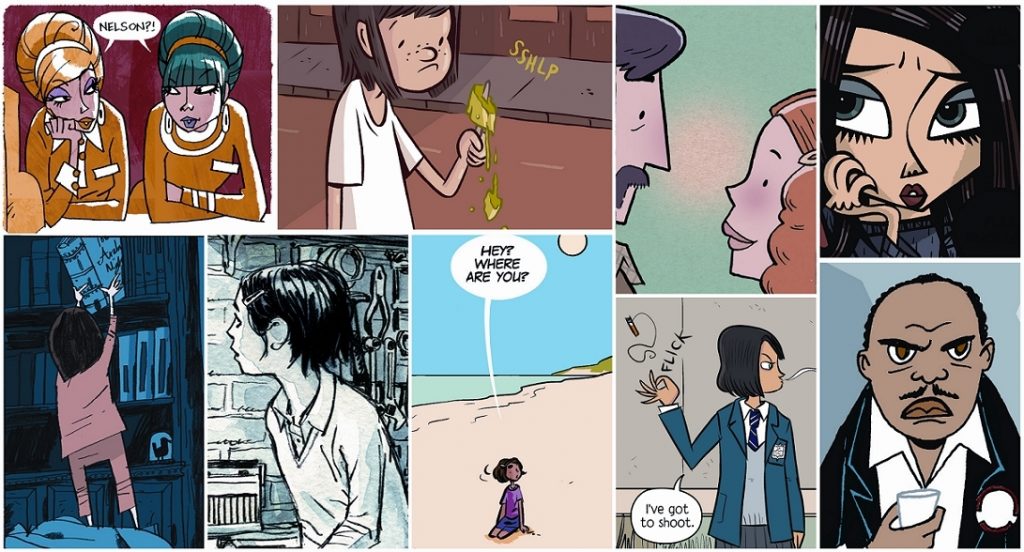